This postcard, a victim of some greasy-fingered sort, was printed between 1908 and 1928, according to the Curt Teich dating number.  The “Old Fort Loops”, a site to see on Google Earth, are a series of railroad sinuosities around what is now Round Knob Lodge in western North Carolina  (35 39 10.64N 82 14 39.23W).  By the time this photo was taken, that train would have been bearing Southern livery (in the mid- to late-1800s, it was the Western North Carolina Railroad).  The “17 Points” means that the line could be viewed from 17 places at one time, or something like that. 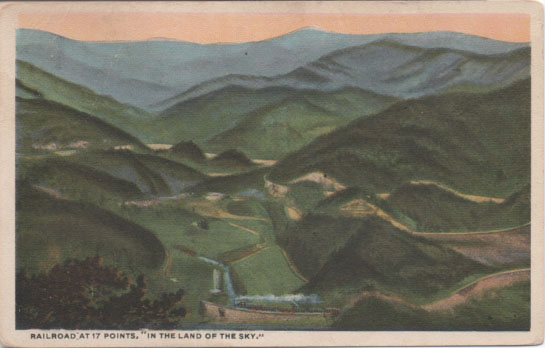 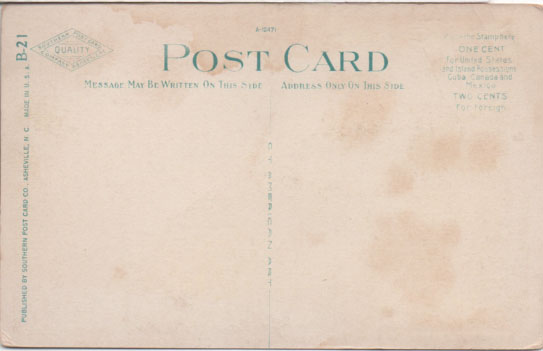 All I could verify from web-based research was that the Southern Post Card Company did exist, but little else.

This eastern portal of Honeycutt tunnel is at 35.86638030, -81.969960.  The tunnel is 1,688′ long and about a half mile or so west of the Ashford Cut.  The reface date on the lintel is 1923. This, of course, is the penultimate tunnel on the line from Elkhorn City KY and Marion NC.  I stood and looked at this tunnel for quite a few minutes, knowing this was the end of an over two-year project to document these tunnels.  This was the last tunnel to be photographed, since we had gone into Marion two weeks earlier and had recorded the tunnel there.  My buddy walked over to an outcropping over to the right of  the line, back about 50′ or so, to investigate what appeared to be a cave.  It wasn’t, but he found two stone cairns there.  Since this tunnel is relatively isolated, I wonder if they were piled up by the workers here in 1907 – 1908.  Could have been grave markers, too, since many men, often foreign labor, died blasting out these tunnels and doing the hard labor of laying a railroad. 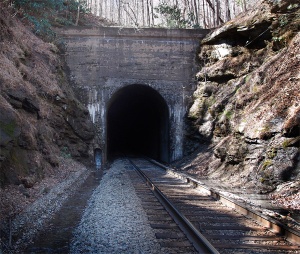 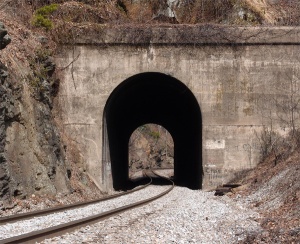 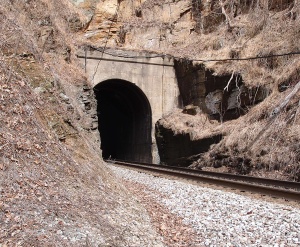 This is the northern portal of 2nd Rocky.  The date is partly eroded. I can see 192, but the fourth numeral is gone. 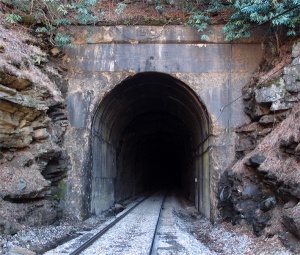 I’m posting these tunnels as they descend to Marion NC, but the pictures weren’t taken sequentially.  This was of necessity, since we’ve taken about four trips to figure out ways to get to these often isolated works of man.  This last Sunday was my long anticipated “that’s a wrap” trip.  We got the two tunnels that finished off the quest to photograph the 54 tunnels between Elkhorn City and Marion NC (there were 55 tunnels, but 3rd Rocky was opened up in 1977…there would have been 56, but the Ashford Cut couldn’t support a tunnel – and a gracious thanks to Dr. Brown for that piece of information).  So, here we are at 1st Rocky, 716′ long and this, the southern portal, located at 35.869675, -82.006134.  This tunnel, which is the first on the long glide down to Marion, is so named because it’s rocky.  The platform to the left, (see comment below) 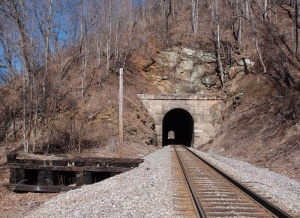 Standing inside Byrd tunnel and looking to Lower Bridal and, just beyond, the entrance to Speedy tunnel.  Three tunnels on one tangent. 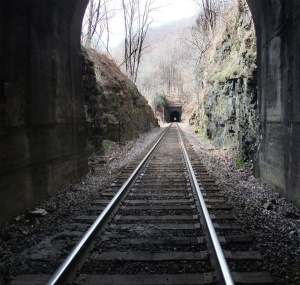 This 1,618′ tunnel lies a tangent in The Loops that features a total of four tunnels (Lower Bridal, Speedy, Lower Pine, and Byrd Ridge).  Coming from Elkhorn City (about 193 miles away now), the track has just competed the first big loop and is going northeast into this, the southwestern portal.  This was taken in winter, but, in summer, it’s beautiful up here. 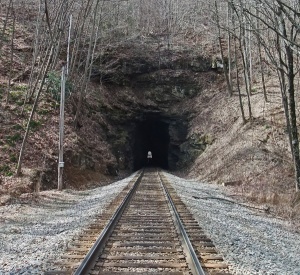 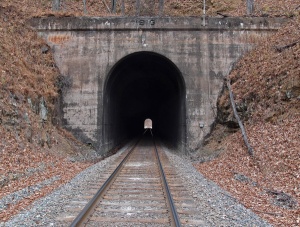 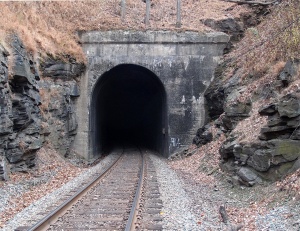 As the CSX heads down the Blue Ridge, it makes the first Loop, curling around to come back to about 100′ away from the tangent that leads into it (but 132′ lower).  Coming out of 2nd Washburn, about 1/4 mile away to the south, lies Quinn Knob tunnel, 545′ long.  It carries a 1912 date on this south lintel at 35.841637, -82.041630.  It’s on a slight bend, leading to 3rd Washburn, which we’ll get to shortly.  Then we’ll take a break and gaze at four tunnels down on Norris Lake.  Ever hear of the Knoxville, Cumberland Gap & Louisville Railroad?  It was involved in the breaching of Cumberland Gap for the mighty steel rails.  More later. 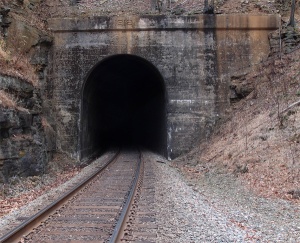 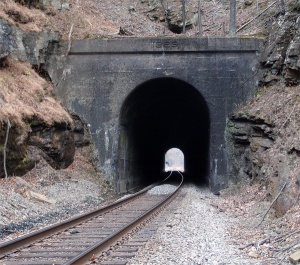 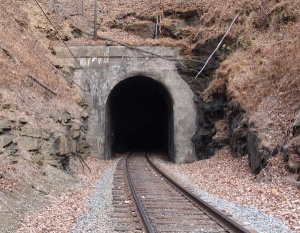 About a mile or so southwest of  Upper Pine Ridge tunnel, lies Upper Bridal tunnel.  It’s a curved tunnel, which mimics the curve of the Blue Ridge Parkway to the northwest of it.  The tunnel is fairly easy to get to, if you know what you’re doing.  This weathered southwest portal is at 35.855180, -82.035674.  The tunnel is 927′ long.  Around 1905 or so, nine workers were killed here when someone accidentally ignited 15 cases (100 pounds each) of dynamite (according to Ashton Chapman in the Charlotte Observer 8/23/53).  Seven workers were killed on the same day, in another area, when a cut they were working on collapsed. 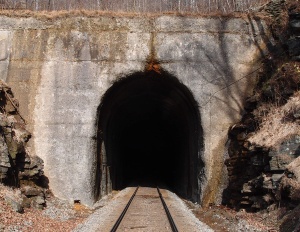 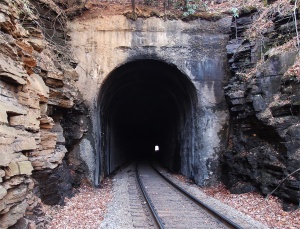