This 600′ or so curved tunnel is in Bell County KY between Pineville and Middlesboro (36.713553, -83.671519 off Patterson Branch Road).  The unfinished portal is on the south.
The line appears to be abandoned.  I saw a few rail dates in the 1920s and the faceup on the north portal has a 1944 date.  However, I think the tunnel is much older than that, since the L&N ran a line in this area sometime after 1890 (as far as I can tell…corrections happily accepted).
I walked through the tunnel and saw only one rockfall area.
Note: walking through a tunnel is not a good idea.

This is the south portal of the tunnel that passes through a ridge south of Hazard Yard.  The tunnel is about 450′ long.

The box truss trestle passes over the North Fork of the Kentucky River.  Vandals (grrrr) have relieved the bridge of its maker/date plate.  However, the bridge resembles others on this line that were made by Virginia Bridge and Iron Company in Roanoke in 1912.

Hello, Hazard!  This is on the north side of Hazard Yard, now plenty of tracks but not much traffic.  In its day, though, it was a full-time yard.  There was at least one turntable.  The circular foundation is still visible.  The next post is of the tunnel on the south side of the yard.

We’re on the Long Fork Subdivision of the old C&O that ran from Martin KY to Hi Hat.  This is the north portal of a tunnel, faced out and supported by wood, near Printer KY (named for a John Printer, in case you were wondering).

And here’s the south portal:

Again, I don’t know how old these wood supports and facings are. The line went in sometime in the late 1920s and was active up until the 1990s.

This is just outside Martin (old Beaver Creek) KY on what was once called the Elkhorn and Beaver Valley Railroad (there’s a split in Martin: the E&BV went west, the Long Fork subdivision went south). 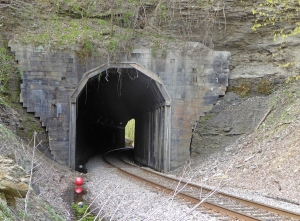 It’s supported by wood bracing and framing.  This line was built in the 1913-1914 time period, but I don’t know if this wood structural support dates to that time.  The timbers are gray with age and have been heavily imbued with creosote. This is an abandoned line.
(I also don’t know who owns the two red plastic balls down on the left) 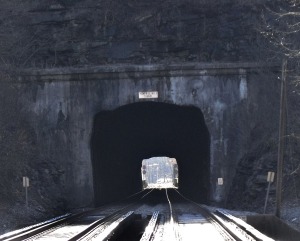 and this is Hemphill tunnel #2 east portal, about 1200′ long

If you’ve got Google Earth, set the options to “digital” and enter these coordinates:
37.44387, -81.59671
Or just follow the N&S railroad line south of Capels WV and you’ll find where my buddy was standing when he took these pictures.  He was sort of in between these two, with #1 being slightly to the SE of him.
There’s great history of these tunnels here <click> 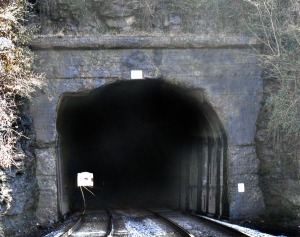 If you use Google Earth, check the Historic Imagery of this tunnel and dial it back as far as you can.  That shot really shows the tunnel well.

My coal country-obsessed buddy recently journeyed to the area around Welch WV.  He found and photographed a couple of tunnels on the N&S lines through there.  The first one is:
(Photo courtesy of Lee Stone) 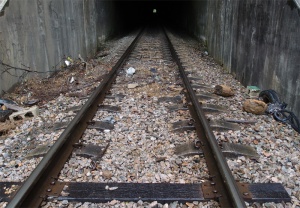 The ballast is covering the center of the ties.  I’ve seen flat (and cracked) concrete ties at the Indian Ridge tunnel in Johnson City, but none like these. Interesting. 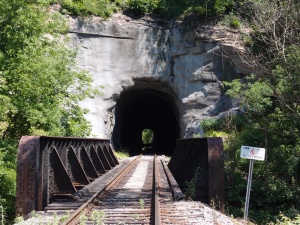 This tunnel at Robinson Creek KY (37.38180, -82.54229) was in the news in April, 2014, when two arsonists set the thing on fire.  The fire burned for weeks and the ceiling of the tunnel collapsed.  The arsonists were discovered and now face federal charges.
The tunnel is 700′ long and dates back 100 years.  It’s on an active CSX line that serves two coal mines.
Here’s what it looks like inside:

I’m told it took major work to get the tunnel back in operation.

A person who follows this blog queried me on a tunnel he’d found access to of Hwy. 83 in Dickenson County VA.  I searched it out and found what it was, but I couldn’t find a blog entry about it.  I’d slipped up.  I thank the guy who caught this.
This is Bear Pen Gap tunnel, west portal, taken in April, 2011.  In my original digital photograph, the east portal is just barely visible at 1/2 mile away.  Returning to this portal today, May 24, 2015, I couldn’t see the other portal.  Part of the tunnel may have collapsed.  Very dangerous.
The air coming out of this tunnel today was cool enough to condense breath. 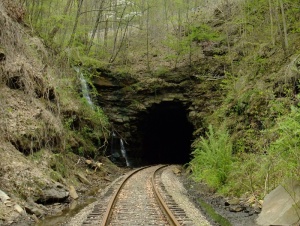 This is the east portal, taken in April, 2011.  The water, as of May, 2015, was still flowing off the left side ledge.  This portal is a little over a half mile from Fremont.
This was the one tunnel on the Clinchfield Railroad’s old Fremont branch, which, starting in 1947, ran from Fremont to Moss #1 mine a little over 14 miles away.  The mine shut down in 1989, but this line was used for a couple more years hauling wood chips from an operation at the Moss location.
The latest rail date we saw in this area is 1972, Lackawanna.
As we walked up to this portal four years ago, a kid (may 13-14 years old?) came down the embankment.  He was totally togged out in Army fatigues – cap to boots – and was sporting a fake pistol in a proper holster.  We all nodded to each other and passed on, but my buddy and I exchanged a puzzled look.  Cosplay is everywhere.
Note: a bear “pen” is a place where early settlers trapped bears and killed them for meat.

Around the Dante VA area, from the turn of the last century to about the late 50s, the Clinchfield Coal Company, founded by George Carter, but later owned by Pittston, operated four coal mine areas in the hollows.  The one we explored recently is at the head of Straight Hollow.  There once was a 1912 adit, but it’s been overtaken by strip mining.  There are still an extant 1914 and two 1955 adits, which you can see in winter, but not in summer, because kudzu.  I’m posting them over at www.unclebobstravels.com.  According to the USGS topo map (St. Paul), there was a narrow gauge railroad that hauled coal out of this mine complex down to a conveyor or loader nearer the railroad.
This is the eastern portal at roughly 36.99604, -82.27922

It’s been almost completely bermed up, but you can just see the top of the original entrance.
About 1,500 feet to the west is the other portal, also bermed up.

This old railroad line, with this tunnel and another further down toward Dante, which we couldn’t find, are clearly shown on the USGS/TVA St. Paul quad, 1935 issue.

This is Rockhouse Creek tunnel (see below: locals called it “Love’s Branch tunnel”).  It’s rudimentarily faced off, both portals and located near Democrat KY at 37 13′ 45″ N, 82 48′ 55″ W on County road 1048, just off Love’s Creek.  The tunnel is maybe 400′ long, with a curve to the east.  I don’t know what purpose was served by the two horn-like things on the north portal (see comment by Jon Hirsch).