In the late 1800s, the Powell’s Valley Railroad made ambitious plans to run a line from Knoxville to Cumberland Gap.  This was in the waning heyday of Middlesboro KY, just on the other side of the Gap (Middlesboro sits in a meteor crater, btw).  The L&N was already in Middlesboro and was looking to get through the Gap to extend their line southward.  When the Powell’s Valley Railroad became the Knoxville-Cumberland Gap-Louisville railroad, the L&N talked them into blasting a tunnel through the Gap.  On the way from Knoxville, though, the line had to cross the Clinch River at this location.  A tunnel was dug through the ridge and a bridge was built and all was well…until TVA began to construct Norris Dam, which was completed in 1936.  The Southern Railroad, which now owned the line,  realized that their trackage here was too close to the water line, so a new tunnel and a new bridge had to be constructed.  These two portals are at 36.363018, -83.550292. The new tunnel is about 330′ long.  There was an historic community called “Oakman” about a mile to the southwest of this tunnel.  It’s gone, but the tunnel isn’t.  That’s how it goes sometimes. We’ll take a look at the other side next. 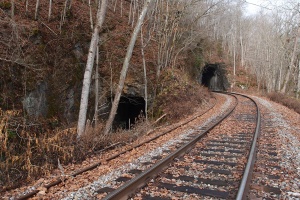