There used to be an L&N rail line through Whitesburg KY.  It’s gone now (the rails were pulled up in the late 80s), but this one tunnel and several deck girder bridges (constructed in 1912) remain.  This unnamed tunnel (at 37.114941, -82.812306, more or less…couldn’t get an exact reading, since the tunnel cut is too narrow to allow a GPS reading and it’s difficult to see where the west portal is on Google Earth) is east of Whitesburg, near the city water works, through a ridge called “Tunnel Hill”.  All the rails are gone and the tunnel is muddy as the Maytown tunnel is.  It’s also short, maybe 150′ max.  The first picture (say hello to Ranger, who manages to get in nearly every picture), is of the western portal (it’s unfinished, as is the eastern portal) and the next picture is looking out towards the east.  It was just too wet to get through to the portal itself.  The railbed from this tunnel on into Whitesburg (a neat little town) has been converted into a greenbelt.  Judging by the rivet patterns on the bridges, the trains must have carried a fair amount of coal out of this area. (tip of the hat to Patty Hawkins and Lina Tidal of the Harry M. Caudill Library in Whitesburg for some of this information) 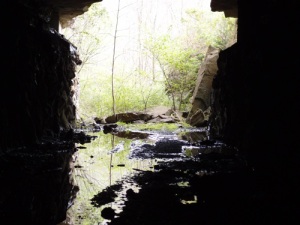