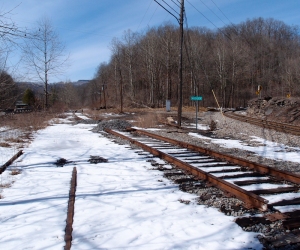 Ladies and germs, welcome to Mudlick Junction, about halfway between Stonega and Andover, snuggled between Stonega Road and Roda Road.  The two lines on the left are, obviously, dead and I think originally went to the mines at Roda.  The line on the far right is live and runs up to strip mines north of Stonega.

According to Hanson’s placename book, “Roda” is short for “rhododendron” and you have the Post Office to thank for omitting the “h” that should have been in “Roda”.  Andover is named in honor of Andover College in New England, which was of some significance to the president of the Virginia Coal and Iron Company.  “Stonega”?  Hanson says it’s just “Stone  Gap” without the “p”.  Ahh, ha.

“Mudlick” isn’t a placename.  It might have been a small settlement once.  A “lick” refers to an outcropping of salt that attracted wild animals and, eventually, hunters.  Meat and salt, all in one.