Recall, the Knoxville Cumberland Gap Louisville railroad company blasted through Cumberland Gap with a tunnel that was finished in 1889.  In the meantime, in 1890, Middlesboro burned to the ground, but quickly recovered and needed places for its people to go.  Middlesboro was going to be the Birmingham AL of Kentucky, if that makes any sense.  Iron was the key.  Fairly good iron, too.  Until the collapse of funding in 1892 and the recession of 1893, Middlesboro was the place to be.  In 1891, Harrogate built the fancy Four Seasons Hotel and a line was built to connect everyone up.  To get to Harrogate from Middlesboro, the line had to go through a ridge.  This tunnel became called the Little Tunnel, about 1,200′ long and reasonably sturdy (it began to collapse in the late 20th century and was converted into a pedestrian tunnel).  Here’s what the north portal, about 3,000′ south of the Cumberland Gap tunnel portal I posted earlier,  looks like now:

This is the last tunnel on what is now the mostly abandoned N&S line coming from Knoxville to Cumberland Gap.  This is Greer tunnel, close to a feature called “Greer Lake”  (not seeing a Greer Lake, folks) and New Tazewell.  This portal, the northwest, is at 36.423103, -83.591183.  The tunnel, soggy and drippy, seems to be about 350′ long.   The history of this railroad and the changes in its trackage provide interesting reading. 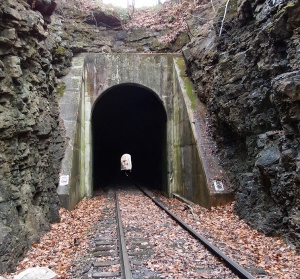