This is the original location of the Fremont train station in Dickenson County VA:

As the railroad went up to Moss mine, Fremont became a busy place…built in 1915.  Sometime later, a giant grabbed the depot and put it on the hill.  Up there is Fremont Avenue (Highway 83 which wends its way between Clintwood and Clinchco.  On the other side of the tracks, across a rather heavy-duty bridge over the McClure River, is Highway 63 which takes you to, surprise!, McClure.
The renovated depot, by the way, looks great and continues to well serve the people who travel in this area.

Since I mentioned Squirrel Camp tunnel (668′), I’m posting it.  It’s close to Sykes Mill tunnel, anyway…near Clinchco on the McClure River.  1929 is the refurb date.  When we got to this tunnel, we realized that we didn’t know when the next train could be due…they were running at about a half hour apart, we thought.  We didn’t want to be inside the tunnel when a train came through, so my hiking buddy, ever the optimist, suggested we just circumvent the tunnel by going around it on the river side.  He even thought he saw a trail down there.  About a hundred feet in, we realized there wasn’t even a trail down there, but we decided to push ahead.  It was probably a little under a mile around to the other side, through dense undergrowth, bushes, small trees, large trees, damp glop and other lovely stuff.  I managed to crack the view screen on my camera ($100 to repair, fyi). But we made it and stood on the other side huffing and puffing and then it dawned on us that we hadn’t heard a train go through.  And didn’t see another the rest of our time there. 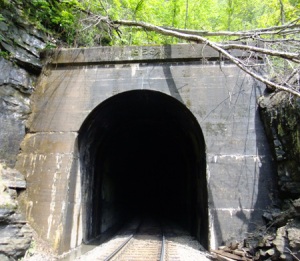