The 4th tunnel heading toward North Carolina in Doe River Gorge is just past a dilapidated deck truss bridge over the Doe River.  It’s crossable.  Careful, though.  The tunnel is centered at36.250708, -82.156534 and it’s filled with water.  (read the comment on this) 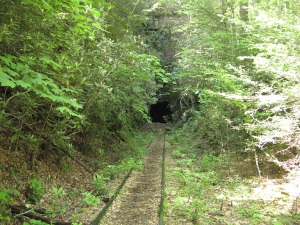 There are two bridges over the Doe in the Gorge.  One still has a truss superstructure, but precious little else and the other is as described above.