This is the Elkhorn City portal of the Stateline Tunnel, which crosses under the Kentucky-Virginia State Line at The Breaks Interstate Park.  It’s 1,523 feet long and that’s a locomotive light there in the tunnel.  It was a pusher locomotive for a train that had just passed by. 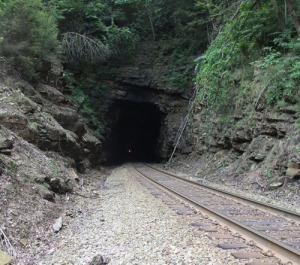 Here’s the surprise.  A little over halfway through the tunnel, we found this: a side portal opening out into The Breaks.  The picture doesn’t show it, but it has a definite cut shape.  Whether it was opened on purpose or was the result of a rock fault or maybe a little too enthusiastic blasting, I’ll never know. (later: anecdotal evidence indicates this was partially the result of an instability in the rock at this point) 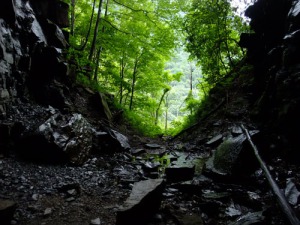 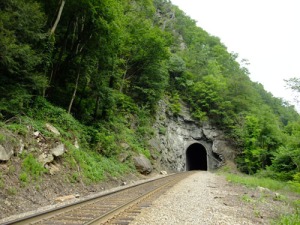 And this is Towers Tunnel, Elkhorn City portal.  The date on the facing is 1926, but that only notes when the tunnel was reinforced and faced with concrete.  The actual tunnel is older than that by maybe 10 years or so.  This tunnel is 921 feet in length and cuts through a ridge between two geological features in the park “The Chimney” and  “The Towers”.  You can’t see the end because it curves to the right.  Next up: Skaggs Tunnel. 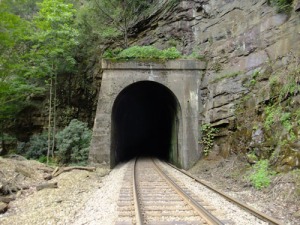