We were coming down Lone Mountain Road in Claiborne County TN when this caught my eye.  The lower track is an active N&S line, the upper track is very old steel and long disused.  As I was taking this picture, a man approached and wanted to know what I was doing.  I told  him I was interested in this old jib crane (called a derrick by the railroad) and asked him if he knew anything about it.  He tended to be a bit confrontational until I explained that I was from Kingsport and that I  had an interest in old railroad equipment and trackage.  He loosened up a bit and told me he owned the land here, but the jib crane still belonged to the railroad.  He said, “this old track was put down in 1878 to load granite and marble from a quarry up the tracks.”  We chatted for a bit more and I moved off, since it turned out that his wife and daughter were a little further down the track (for some reason) and he had gotten suspicious when he saw me exit my car and come in that direction with something in my hand (my camera).  Did I mention he was carrying?
I was rather amazed at the date, so I made an audio note of it and we moved on, looking for Lone Mountain elementary school, which was right in this neighborhood.  However, we encountered Dan Beeler, who told us the school had burned down eight years before.  He did confirm the dating of the railroad, though, and said the foundation of the old depot was still there, behind the still existing old store that had been a post office for Lone Mountain.   He also informed us that Lone Mountain was quite a hub of activity in the day, with trains stopping to load pulpwood, minerals, livestock and the like.  Here’s what the foundation of the old station looks like today: 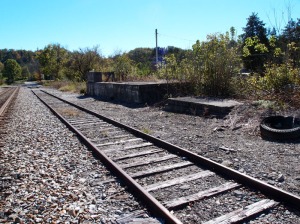 This is looking west.  The track here ends just a little bit beyond the end of the foundation…there’s a cross-rail block there.  The steel in this track varies from a 1901 Scranton to a 1903 Carnegie.

So, I had a puzzle. Dan Beeler told us the granite and marble (Tennessee marble, not “real” marble) came from a quarry in Springdale, about 4 miles to the east.  I carefully checked Google Earth to find any remnants of a railbed in that direction and couldn’t find any…then, it suddenly all clicked.  I’d been in the area before documenting the three tunnels on the old Knoxville, Cumberland Gap and Louisville Railroad.  The old stories handed down to the gentlemen we talked to were giving a date a decade or so too early.  This was the old K, CG & L line and probably came through here about 1888.  This was the company that managed to totally screw up the first digging of the tunnel at Cumberland Gap.  They also managed to off a number of important Knoxville personages on their very first run when the locomotive went off a trestle at Flat Gap.  This railroad company was as short on luck as it was on money.

My feeling is that the railroad came through and built the spur to the jib crane and down to the station.  The quarrymen (not the Beatles) and others would haul the product by wagon down to the railroad where it would be loaded onto freight cars for a trip to Morristown, Knoxville, or, eventually, to Middlesboro.  Everyone was hot for Middlesboro in that time, since quality iron had been discovered in the area.  Flash in the pan, as it turned out.

If anyone has more information on this or wants to tell me I’m all mouth and no trousers, please make a comment.