Back in 1945, Blue Diamond Coal Company, out of Knoxville TN, opened up the Leatherwood mine complex, about ten miles up Leatherwood Creek from the North Fork of the Kentucky River.  At the same time, the L&N ran a spur from their main line on the north side of the river to the mines and, in order to handle the vast amount of coal coming out of Leatherwood, the railroad also built a breakdown yard a little further up the river toward Hazard, near a town called Dent (it’s gone now).  At the intersection of the main line and the spur (at 37.12946, -83.08649, nearest Google Earth locator is Cornettsville KY), a complex was built to service the locomotives.  It included a turntable (see it here), a pumping station to bring water up from the river to a tank used to service the steam locomotives, and various other buildings.  The remains of the turntable are still visible:

To get a sense of scale, that’s my buddy standing over on the other side of the foundation (he’s dressed in white).  The remnants of the pumping station and various other buildings are still there, also.  This yard operation only lasted about a decade or so.
This is looking toward where Dent Yard once was:

But one thing had me puzzled.  Just a short way down the river from the main trestle, I saw these: 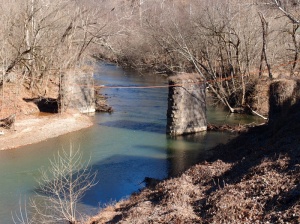 Another bridge, an old style bridge, didn’t seem to fit.  There was no need for a wye here and these piers seem to predate 1945.  It took a bit of researching, but I located a map of Perry County from 1937 and got my information.  The L&N came into Hazard in 1912 and spread out to service both timber operations and small coal mines.  In 1937, there was already a main line in place here.  I suspect this bridge carried a light rail line, possibly for timber (logging was certainly taking place around Leatherwood Creek in that time period…small coal operations, too), across the river to the main line.  How long it was viable, I have no idea.
Oh, that orange pipe crossing the river comes from a gas well across the tracks on the left.